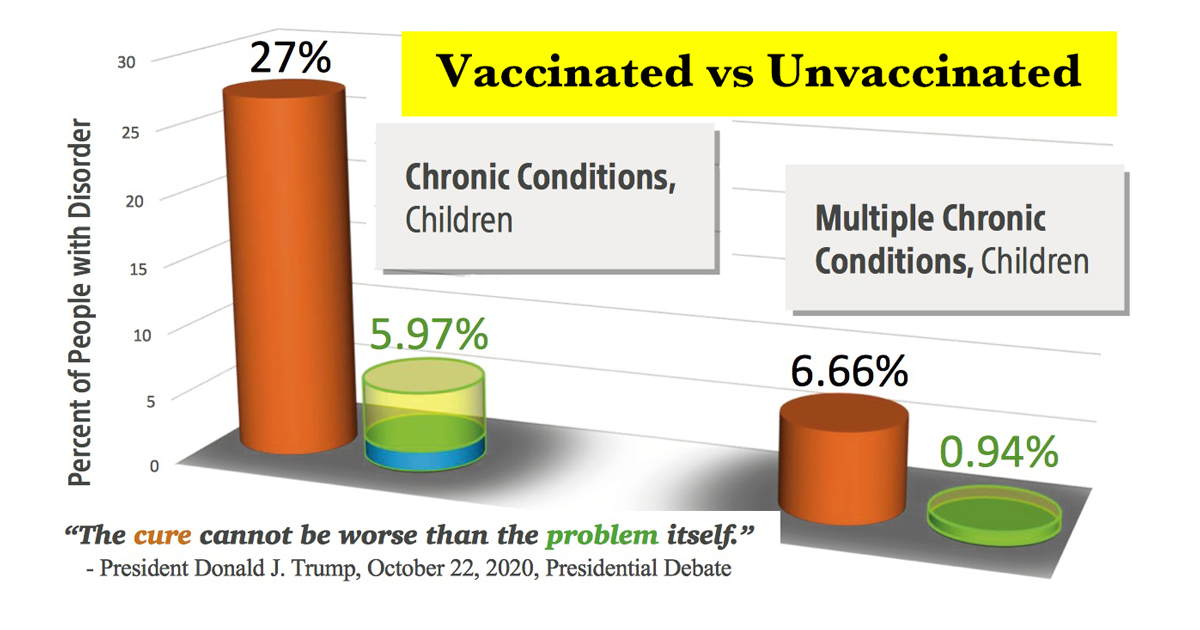 The Control Group is suing the President of the United States to issue an Executive Order (or similar legally binding proclamation) that would exempt all Americans from mandatory vaccination by arguing that current health outcomes of vaccinated vs unvaccinated populations demonstrate beyond any doubt that vaccines are causing an epidemic of great harm to the American public, and therefore, the burden of proof that any one unvaccinated individual is a “threat” to public health must be statistically proven before a public health mandate may ever be issued again. 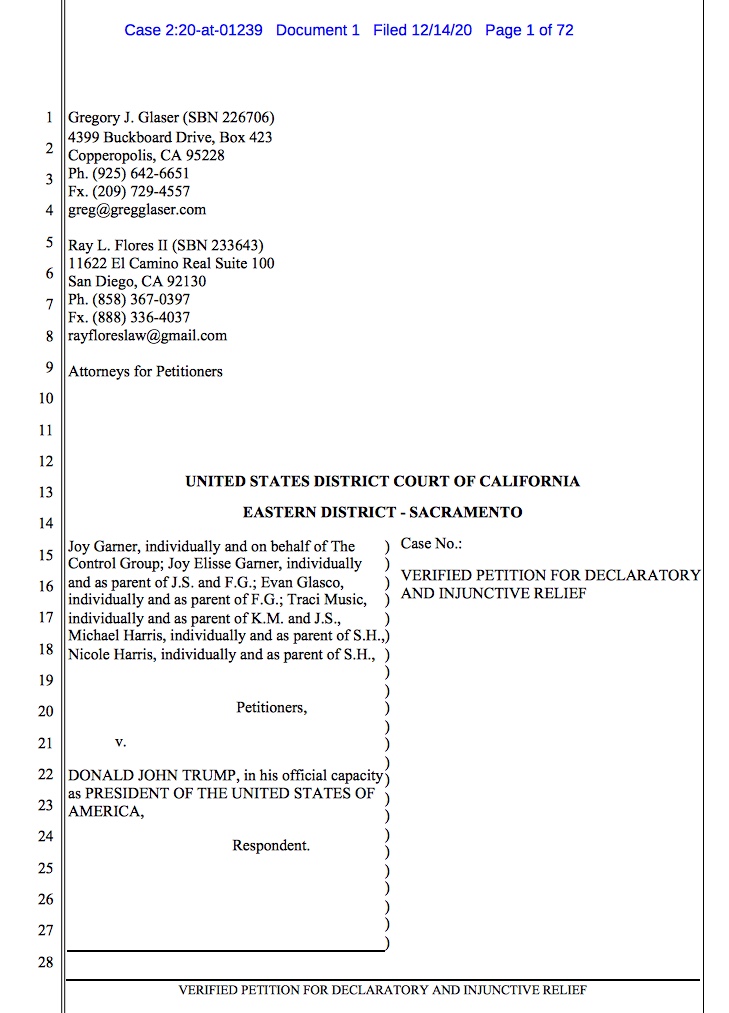 On February 22, 2021 The Control Group will appear in Federal Court to request a court order to (1) recognize the role of vaccines in the children’s health epidemic, (2) uphold that control group studies of vaccinated v. unvaccinated are scientifically advantageous, and (3) exempt all persons from mandatory vaccination.

…a true American Patriot working for the people, had this to say about her landmark lawsuit that incorporates a MASSIVE amount of vaccinated vs unvaccinated health outcomes data:

Larry, the main complaint lays out the reason for our choice of defendant, our standing, and the court’s jurisdiction, etc. Because of the nature of the problem, no other branch of government, (legislative or the agencies they’ve created) can provide the relief sought, and the federal agencies are all subordinate to the President in any case. In the end, the correct defendant is the one who CAN give the relief requested, and if we were to sue the FDA, it would be dismissed due to the fact they have no power to issue the orders/relief requested. 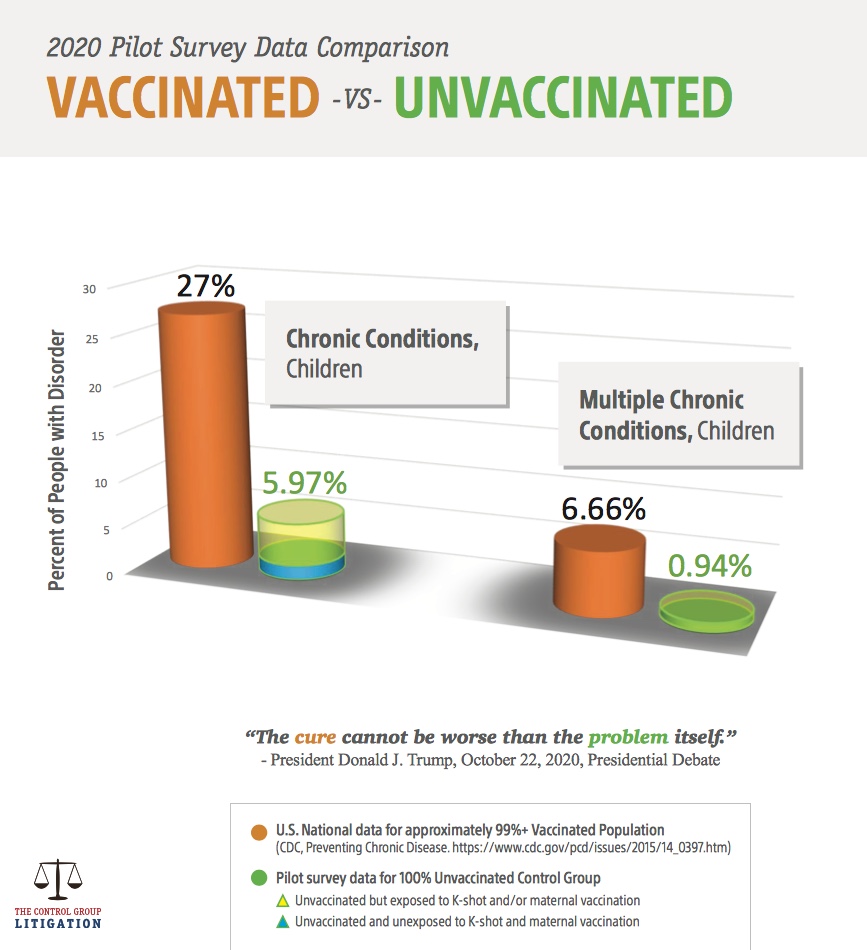 No agency is empowered to issue the National Security orders required, and the legislative also cannot cure this, (nor would they even if could, since they caused it). This Nation is now is a position where this is in fact a most urgent National Security Emergency. This pandemic of immune system mediated and deadly health conditions, and the imminent threat of economic collapse, is both imminent and inevitable without altering the course we’re on. The trajectories prove this, and they are not merely our opinion, but a matter of judicially noticeable published public records. 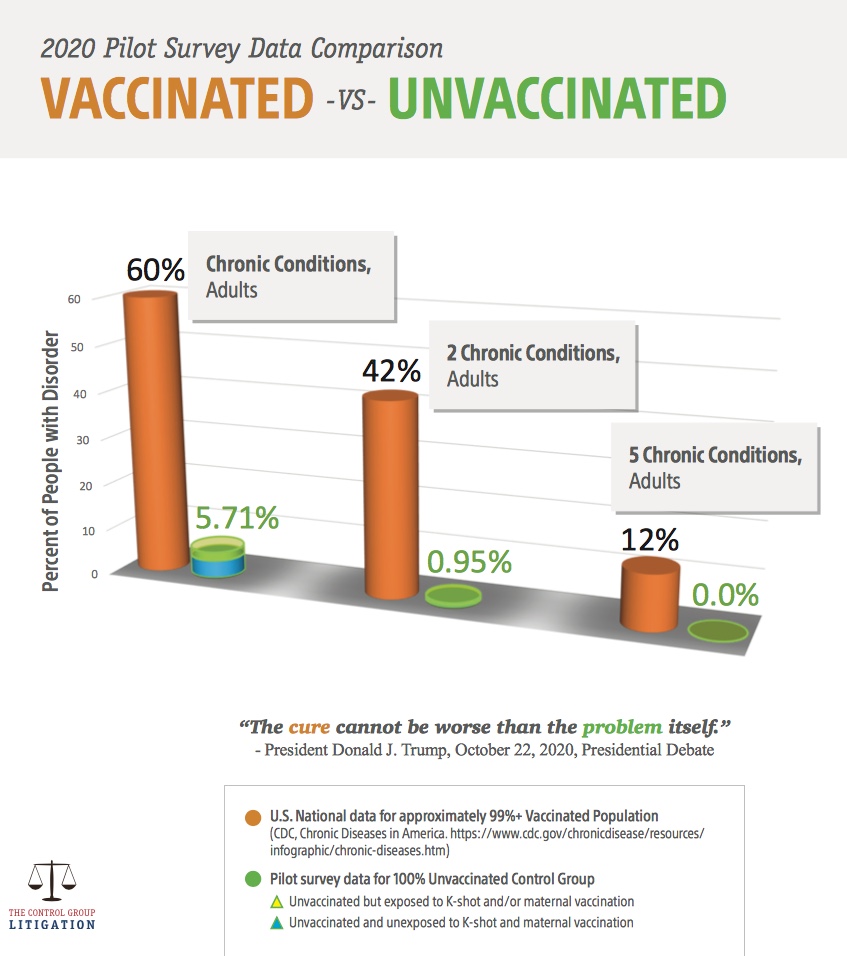 Immediate relief (in addition to that requested in the underlying action) is required to prevent all Americans being forced to “serve” as experimental medical subjects against their will, due to discrimination that is based upon vaccination status. Our evidence demonstrates, numerically, that vaccines are far more than a reasonable suspect in causing this pandemic of chronic, disabling, and deadly disease our nation is now suffering. Our evidence has eliminated any other explanation for it.

The 13th Amendment (prohibiting involuntary servitude) is violated by ANY form of discrimination that’s based upon vaccination status, whether governmental or private. This is because such discrimination is based solely upon an individual exercising their absolute right to refuse to serve as an experimental medical subject. 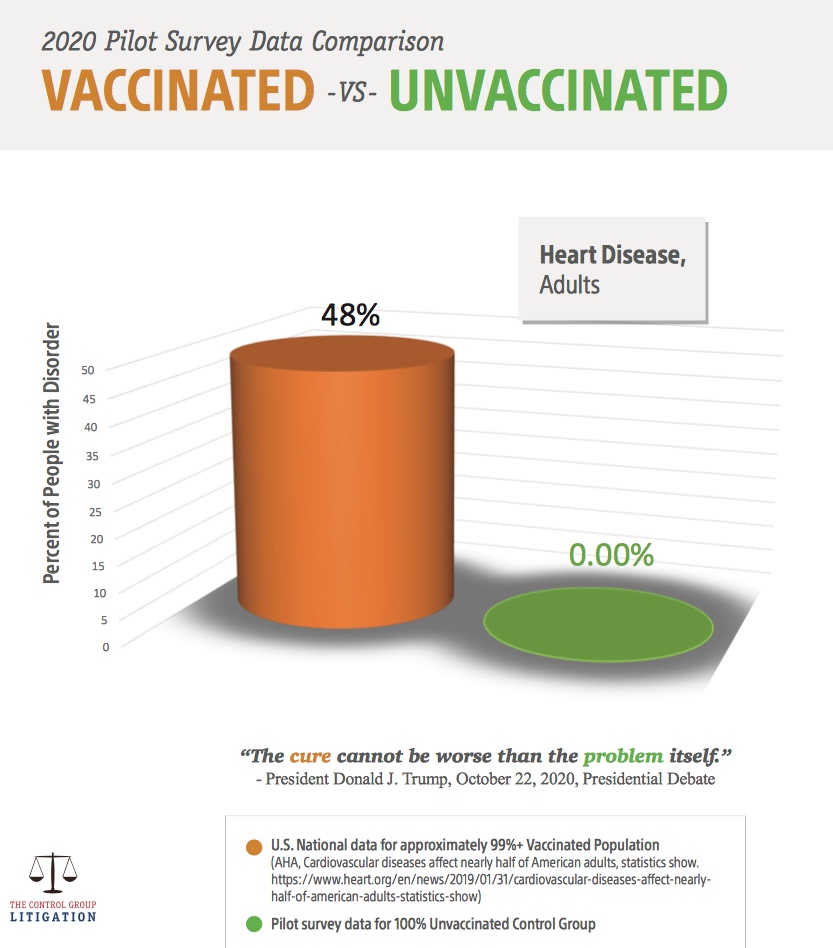 The government can show no compelling public health interest is served by enforcing or permitting discrimination based upon vaccination status, and this is the effect of the burden shifting. Previously, the burden to prove forced vaccination does not serve a compelling government interest has always been on the public. Our suit shifts this burden and appropriately demands numerical evidence (of compelling government interest) that vaccines do more good than harm to “public health”. All prior attempts have always come from the “individual” rights perspective, (which should have been protected) and lost on the “collective” and the government’s position that “some” human sacrifices are required to protect the “herd”.

Before this suit, nobody had ever presented clear evidence that “public health” was actually being DESTROYED by vaccine exposures. Because our evidence package is unique in this way, it allows for the burden to shift upon the government to prove that anyone who would be denied the right to avoid serving as an experimental medical subject, must FIRST be given due process (notice, opportunity to respond etc.) BEFORE such a right can be denied. 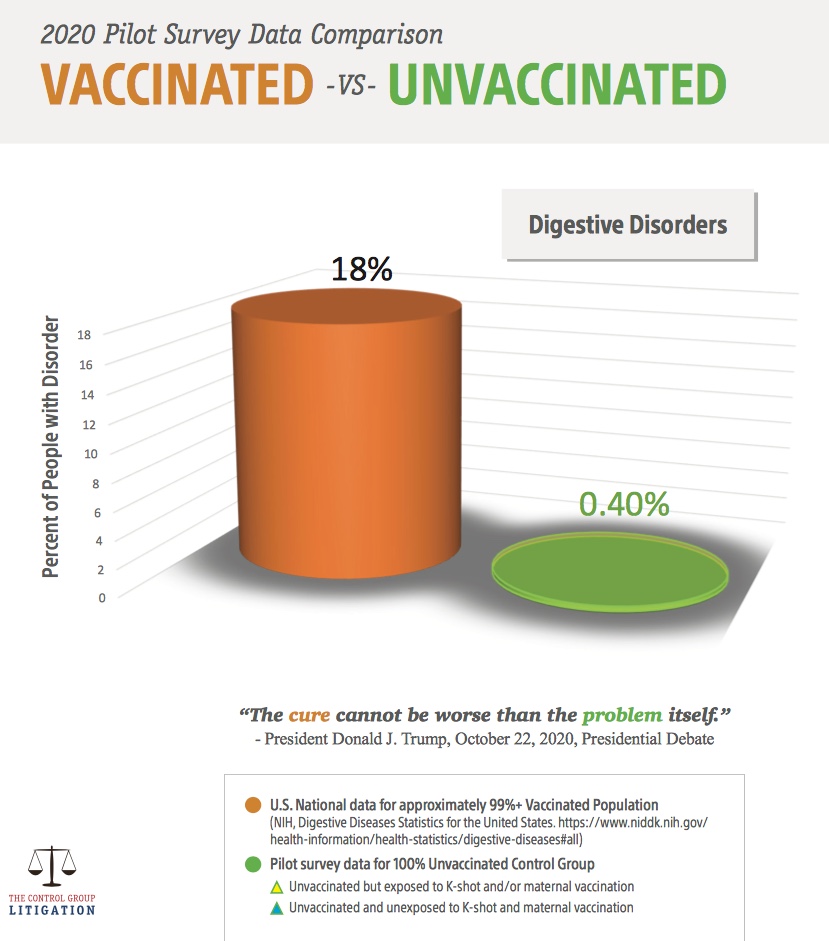 In other words, the government will henceforth be required to demonstrate that the individual has done something, or posed some threat, BEFORE any ONE person can be denied any rights (discrimination) based upon their refusal to serve as a subject in human medical experiments.

The main complaint covers many rights that are violated by this Nation currently permitting discrimination based upon vaccination status, and also outlines how these abuses have led to a public health catastrophe which now threatens to collapse this Nation.

Basically, this action is to corner the government into being forced to prove that vaccines are NOT the primary CAUSE of our Nation’s current public health catastrophe. Without directly suing every branch of government, it is to set in place a prohibition against discrimination based upon vaccination status UNLESS or UNTIL any branch of government wishing to enforce, or even permit such, has proven that vaccines are, NUMERICALLY, preventing more harm than they are causing to public health, (the “herd”). 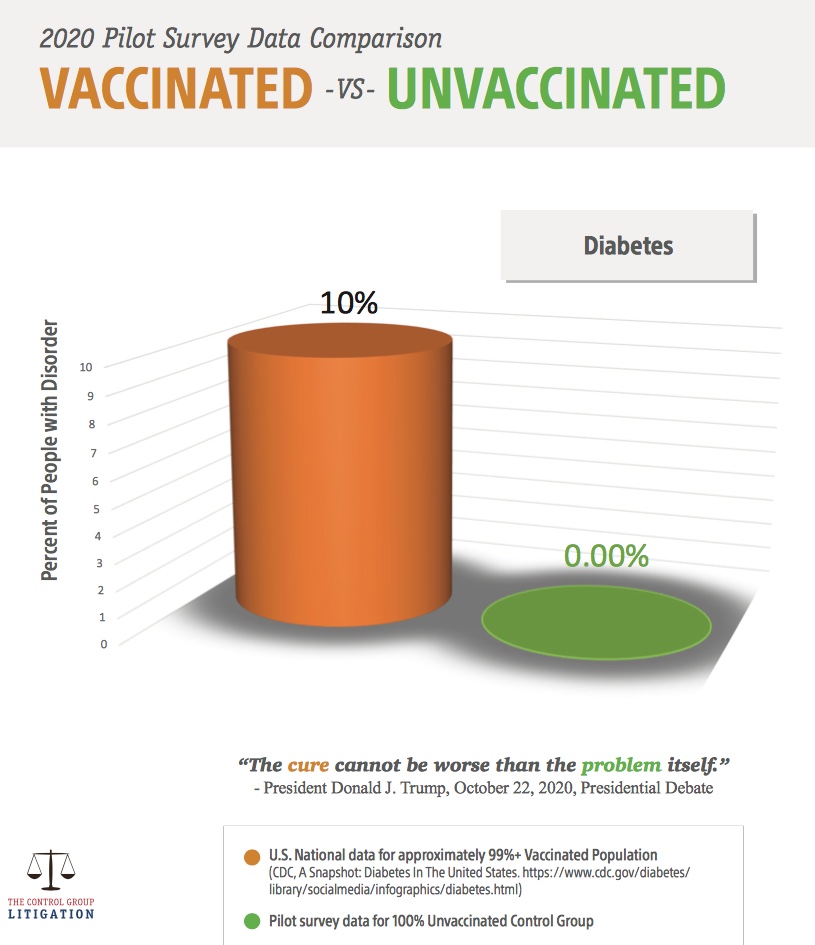 It’s a frustration beyond belief to know, going in, that INDIVIDUAL rights are essentially irrelevant once it is merely claimed that a particular intervention is for “public health”. Once that claim is made, literally ANY intervention is permitted and the citizens are forced to prove the collective is harmed by the intervention BEFORE they can get their rights BACK.

Our suit is engineered to turn this around. If it ends up in the U.S. Supreme Court, this would install legal and evidentiary burdens that would be required to be met BEFORE so-called “public health” justifications are permitted to dissolve the constitutional rights of Americans. It puts the “due process” back into it’s proper place. Just because the government claims to be eliminating EVERYONE’s constitutional rights “equally” doesn’t mean they can do so without ANY due process or evidence it’s required, or will actually do anything to protect or benefit public health.

For a swift summation of the evidence on the study, and it’s proper application to this case, (within a legal perspective) you might want to review the “Summary Report” on the Control Group study. It’s also a concise guide to the graphs. 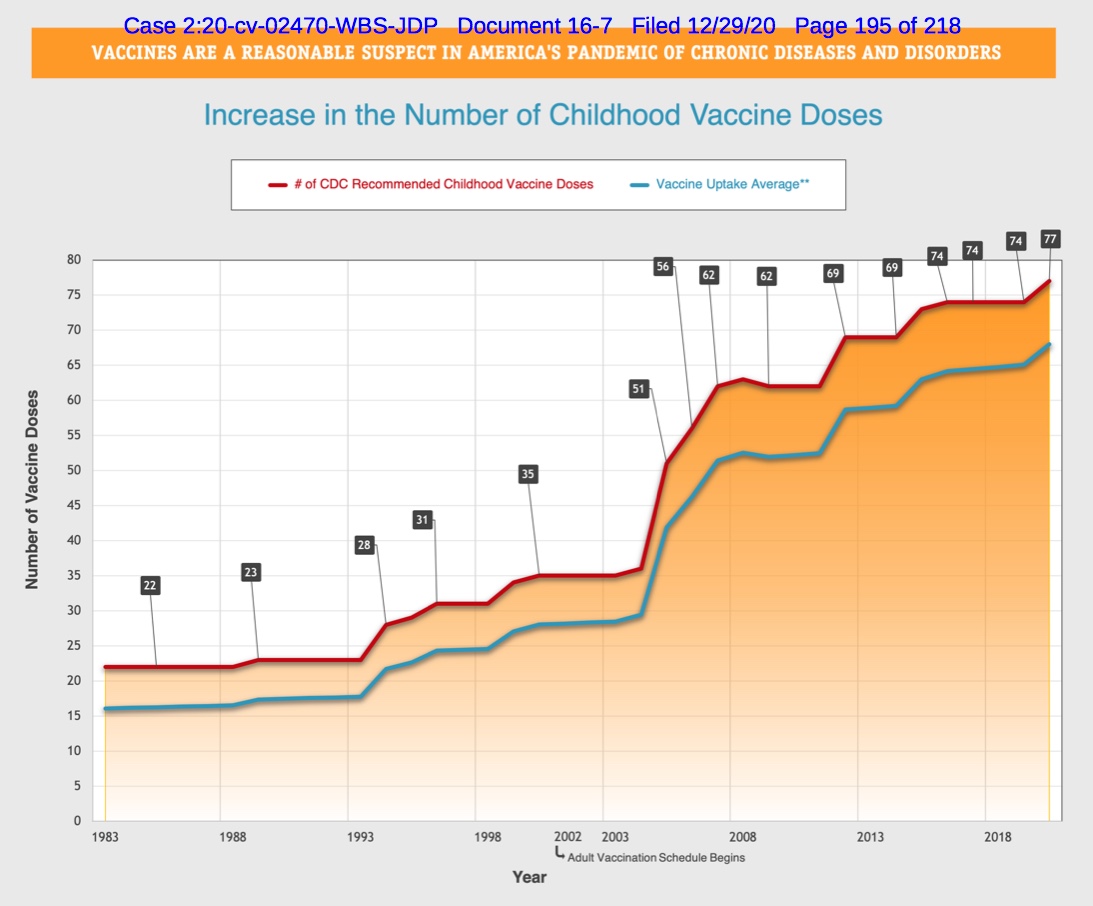 THANK YOU JOY GARNER and also the attorneys GREG GLASER and RAY FLORES for creating a massive body of research and filing a lawsuit to end vaccine mandates!!!

To review the LAWSUIT against President Trump and the MASSIVE amount of data included in their lawsuit that proves beyond any doubt that vaccines are THE CAUSE of HEALTH DECLINE in America, go to: https://informedconsentdefense.org where you can also DONATE to their cause!